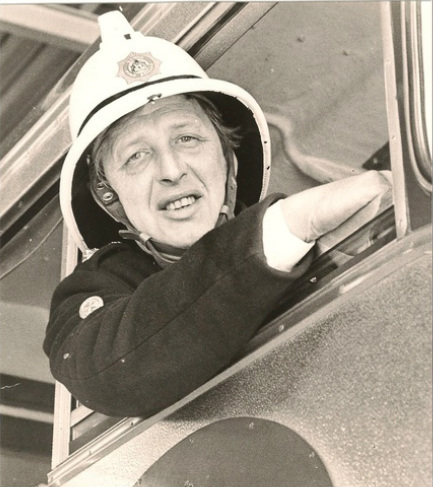 Tony sitting in the drivers seat of 312 - DDV 531C
Tony joined the old Totnes station C7, ( see page "Out Of The Old Station" ) part of the Devon County Fire Service on the 19th October 1954 with fire service No 2123, which changed to 763 some time later. After his Initial Recruits Training Course at Barnstable Fire Station in 1956, Tony was promoted to Leading Fireman (LFF) on the 3rd May 1966, and then attending and passing a promotion board for the rank of Sub Officer (Sub/O) on the 1st April 1968, and finally, promoted to the rank of Station Officer (Stn/O) on the 1st September 1973. Tony was awarded his 20 year Long Service and Good Conduct Medal at a special ceremony at the old Brigade Training School at Camel's Head Fire Station, Plymouth on 3rd February 1975.

Due to Brigade policy at the time there existed a compulsory retirement age of 55, which Tony reached on the 28th September 1987. But due to applying for and being granted a six month extension (on the condition of passing a brigade medical) he actually retired on 27th March 1988, culminating in a grand total of 33 years and 5 months serving the people of Totnes as one of the town's fire fighters.

Other qualifications and courses:-

Payment at the time was an annual retaining fee of £30, payable quarterly in arrears. A turnout fee of 12/- shillings for an initial period of 2 hours and 5/- shillings for every hour after.

Attendance fee ( attending the station but not actually riding the appliance ) was 7/- shillings for any call under 1 hour and 5/- shillings per hour after that.

There was no payment for attendance for training.

The station appliances consisted of an Austin pump/ wheeled escape (PE) and an Austin towing a trailer pump (TV/TrP). Later a mini moke was stationed at Totnes for hydrant testing and general duties. 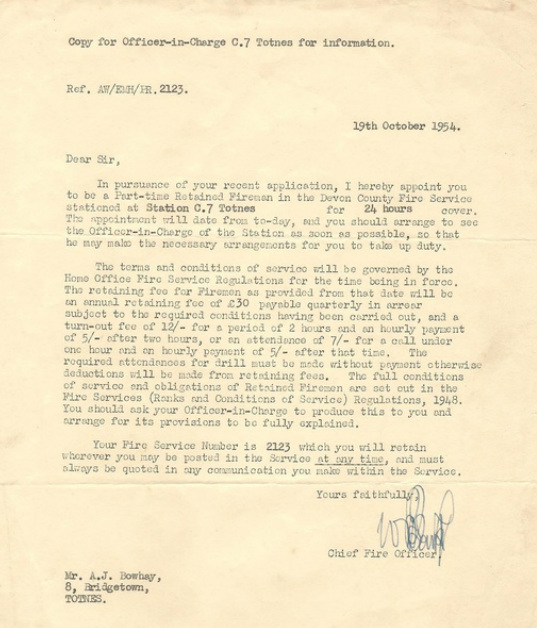 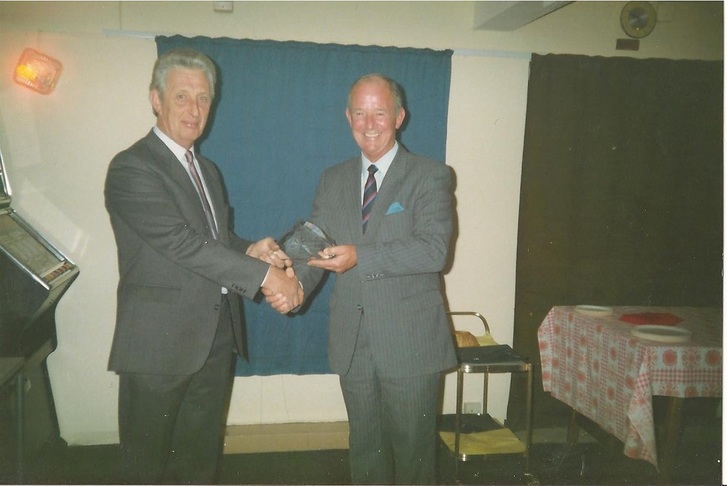 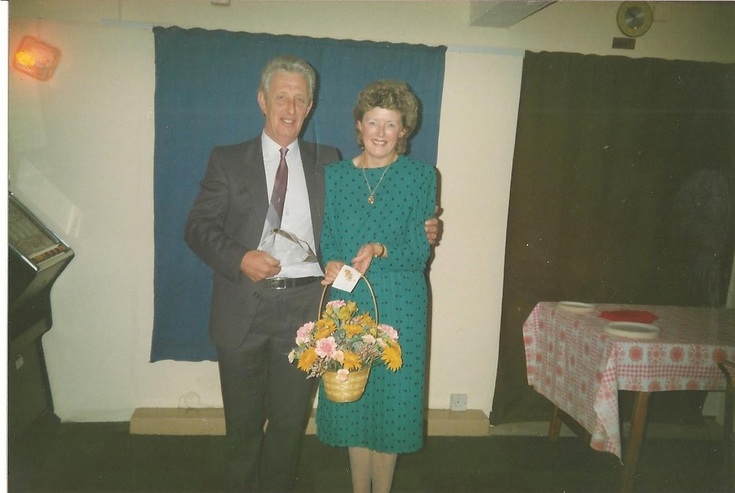 Tony and his lovely wife Barbara 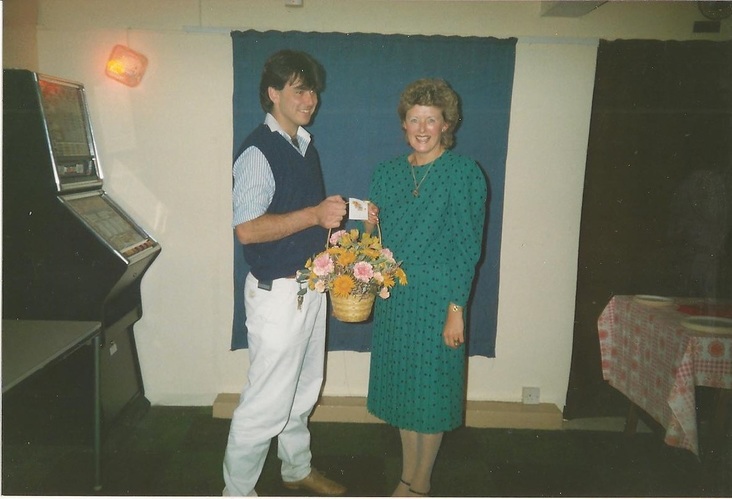 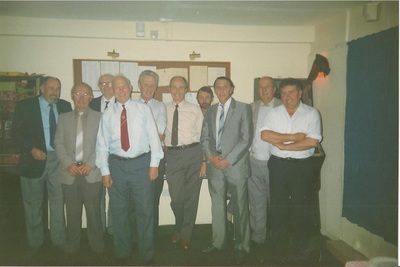 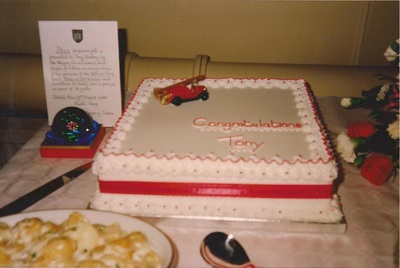 Just a couple of pictures from Tony's retirement - March 1988

The cake, beautifully made by Barbara herself, and the paperweight presented to Tony by the Mayor and Town Council. 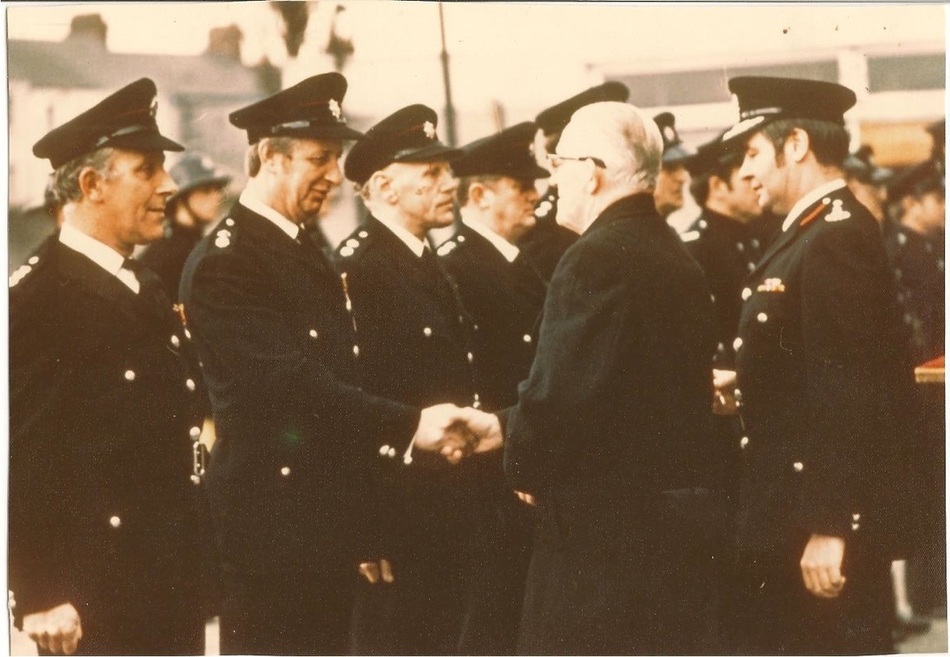 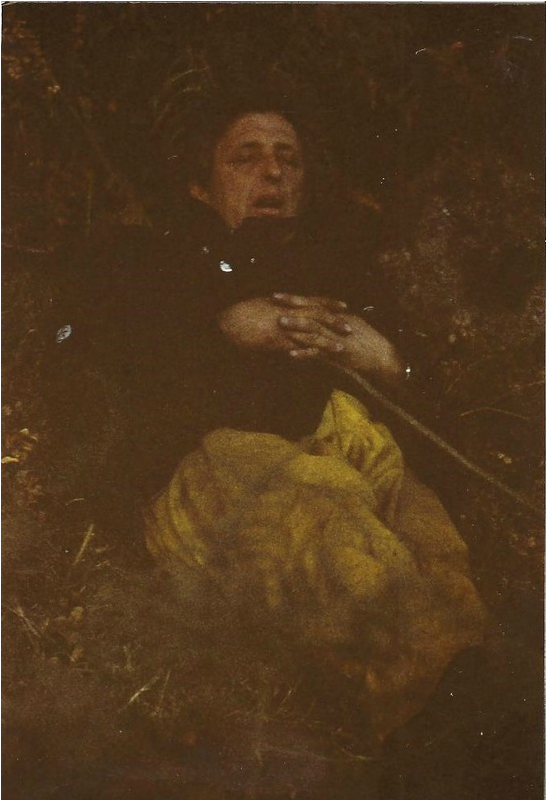 Tony having a kip in a hedgerow after a long day fire fighting.
Totnes at a very large heathland and gorse fire on the Blackdown Hills, Somerset during the hot summer of 1976.

A poetic tribute by Bruce Connell

FROM THERE IT SEEMED QUITE LOGICAL
WE ALL COULD PLAINLY SEE
- PROMOTION? - STATION OFFICER! ! -
IN 1973

JUST TWO YEARS LATER - "75"
A MEDAL FOR YOUR CHEST,
LONG SERVICE AND GOOD CONDUCT
YOU WERE ONE OF THE BEST

AND YOU'LL REMEMBER "TONE"
THE DREADFUL FLOODS OF "75"
WE PULLED SOME FOLKS OUT, PROPER WET
BUT THANKFULLY, ALL ALIVE

AND THEN THERE WAS THE FAIRSEAT INN
THE PLACE WAS FLOODED OUT
YOU CLEARED THE BAR OF LAGER "TONE"
AND WE CLEARED ALL THE STOUT!!

WE'VE HAD SOME TIMES, WE'VE HAD SOME LAUGHS
US "LADS" HAVE BEEN GOOD PALS
BUT "TONE" DO YOU REMEMBER WHEN
WE RESCUED THOSE FOUR COWS?!!

WE SCRATCHED OUR HEADS TO TRY AND FIND
A WAY TO SET 'EM FREE
YOU SAID, RIGHT LADS!! WHO'S GOING IN
AND WE ALL SAID - "NOT ME"!!!

YOU LAID ON BALES OF HAY
AND DRAGGED THEM COW'S OUT BY THEIR NECKS
AND THEN WE PULLED YOU OUT, YOU TWO,
YOU LOOKED TWO PROPER WRECKS

WE HOSED YOU DOWN, AND SCRUBBED YOU CLEAN
AND PROPER FOOLS YOU FELT
THE FUNNY THING WAS, - ALL NEXT WEEK
THE BOTH OF YOU STILL SMELT!

WE'RE SURE YOU'VE GOT GOOD MEMORIES
OF THINGS YOU'VE DONE AND SAID
LIKE POLISHING THAT THING OF YOURS
THAT'S BIG,  AND SHINY RED!
A FIREMAN'S LOST, AS WE ALL KNOW
UNLESS HE KEEPS IT CLEAN
WE ALL KNOW FROM EXPERIENCE
COS' WE KNOW WHERE IT'S BEEN

THE BIG WHITE CHIEF HAS "WROTE" TO YOU
AND THANKED YOU FROM THE HEART
HE KNOWS IT'S HARD TO LEAVE A JOB
OF WHICH YOUR SOULS A PART
BUT NOWS THE TIME TO HANG THAT HAT
ON YOU PEG FOR THE LAST TIME
AND LOOK BACK ON A JOB WELL DONE!
A CAREER THAT'S GOOD AND FINE

YOU HOSE YOUR GARDEN TONY,
LEAVE US TO HOSE THE FIRE
WE HEAR YOU'VE GOT A LITTLE HOSE
AND CAN'T GET IT ANY HIGHER

IT'S TIME FOR YOUR PHOTOGRAPHY
AND BADGER WATCHING TOO
GIVE OUR REGARDS TO ARTFUL OWL
AND BEWARE OF PITS OF POO!!
SO HERES TO YOU AND BARBARA
WE WISH YOU ALL THE BEST
LAY BACK, RELAX, ENJOY IT "TONE"
AND TAKE THAT WELL EARNED REST 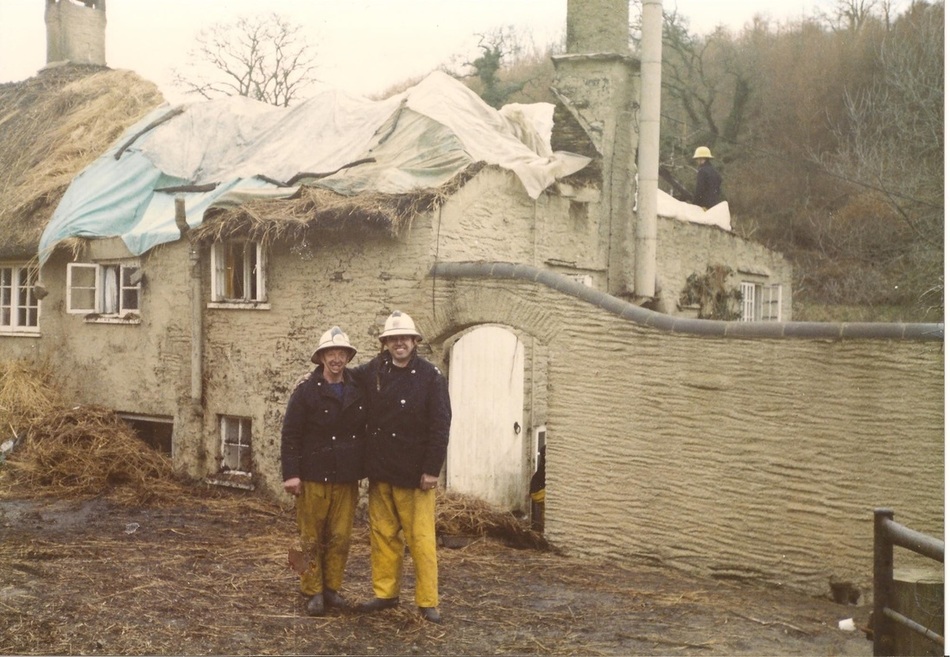 Tony and ADO Bob Prince at the Coombery, Cornworthy, a little worse for wear, but loving every minute. 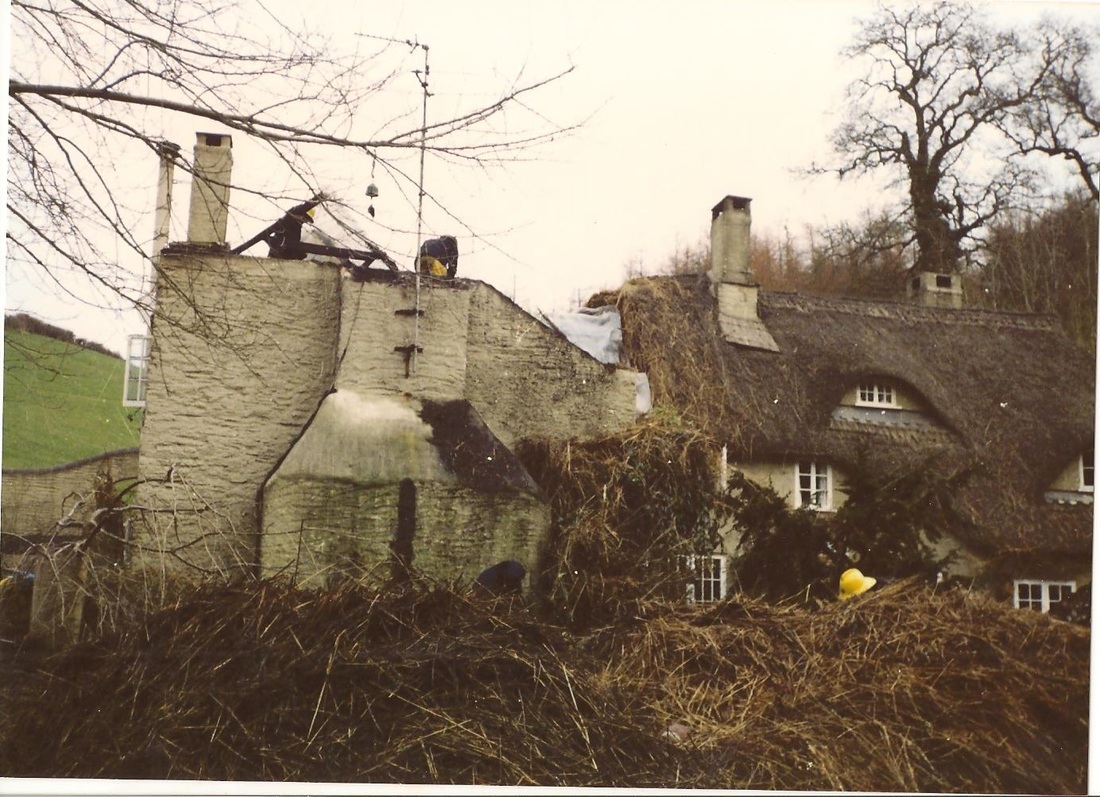 An excellent "STOP", saving over half the building 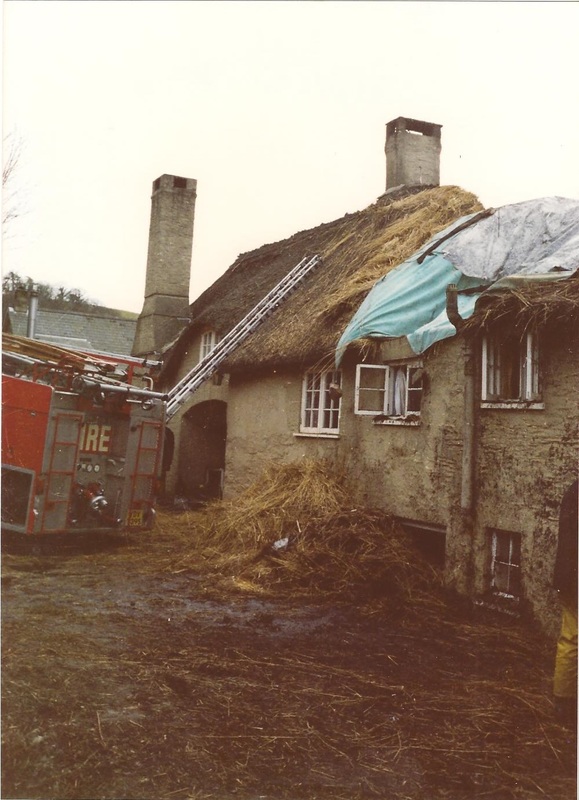 The Coombery thatch fire was well alight on arrival of the Fire Service and was subsequently used as a training aid to show what can be saved and achieved at a thatch fire with prompt attendance and efficient fire fighting,
Thatch roofs being one of the most difficult fires to extinguish. 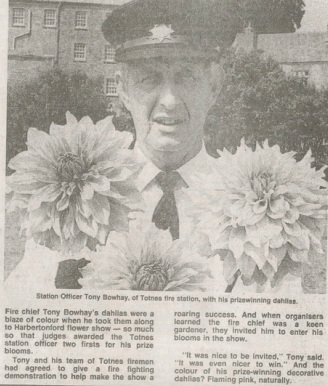 Station Officer Tony Bowhay, of Totnes fire station with his prizewinning dahlias.
The report from an unknown local paper reads:-

Chief Fire Officer Tony Bowhay's dahlias were a blaze of colour when he took them along to Harbertonford flower show - so much so that judges awarded the Totnes station officer two firsts for his prize dahlias.

Tony and his team of Totnes firemen had agreed to give a fire-fighting demonstration to help make the show a roaring success. And when organisers learned the fire chief was a keen gardener, they invited him to enter his blooms in the show.

"It was nice to be invited" Tony said. "It was even nicer to win"

And the colour of his prize winning decorative dahlias?  Flaming pink, naturally. 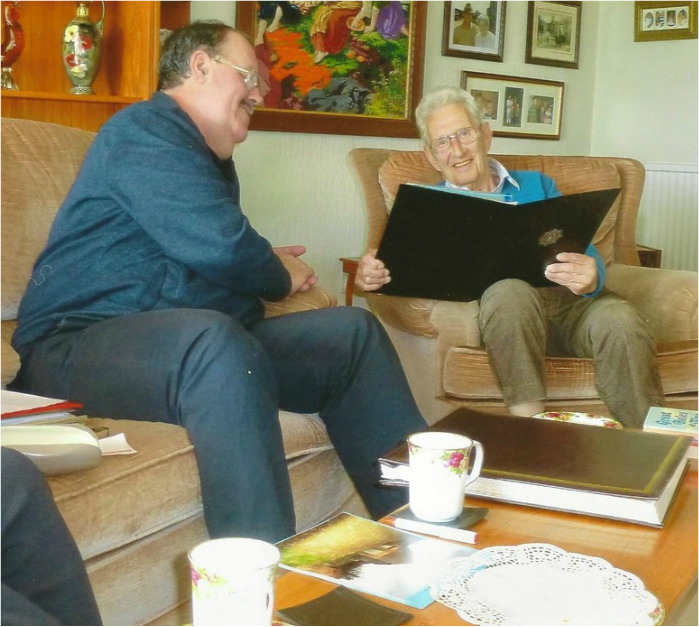 The last picture taken of Tony by his wife Barbara at their home in Totnes, seen here talking to me about his Fire Service career and putting together this portrait.

I served with Tony for 13 years at Totnes and we have remained good friends.


Sadly he passed away on 16th September 2014 peacefully at Torbay Hospital.
His funeral, which was held in St Mary's parish church in Totnes High Street was filled to overflowing with family and friends, the full Totnes Town Council, serving and retired fire fighters from all over Devon and townspeople who wished to show their respect and gratitude to a man who had dedicated over 60 years to the town of Totnes.

Tony was made an Honorary Freeman Of Totnes after retiring as Totnes Station Officer and then 26 years as the Town Sergeant, but sadly passed away before he could collect his medal and citation, which now has pride of place in their lounge. 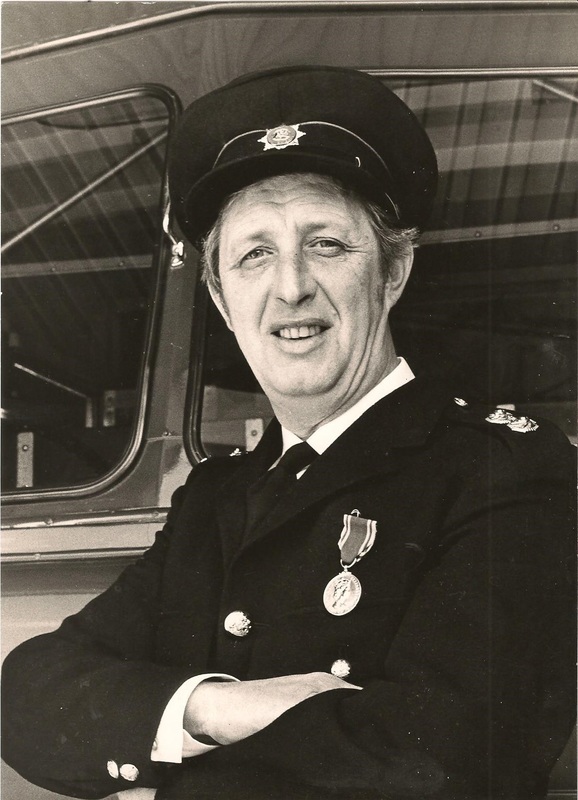