Several pictures of what was Totnes's most disasterous fire in recent years. The world famous East Gate Arch, seen in nearly all professional photographs of the town, was devastated, along with several other properties in the early hours of Sept 14th 1990. Crews from all over South Devon attended and water was relayed over approximately 1/4 of a mile from the old Bacon Factory leat and the River Dart.

The initial call, which on arrival of the first Totnes crew was just a small amount of smoke in South Street, rapidly developed into a serious fire which engulfed the large property to the left of the East Gate, travelled across the Arch (which separates Fore street from High Street) and into Ramparts Walk, at one time spreading in 5 separate directions, threatening the whole centre of the town.

The excellent pictures and video, here and below, tell the story. For the firefighters who attended, including myself, it was a night to remember. Not all are shown here, but to all who supplied pictures - Thanks.


I have been asked to make the East Gate fire photos full size as much of the detail was lost when these pictures were mounted in the gallery.  I hope this is OK. 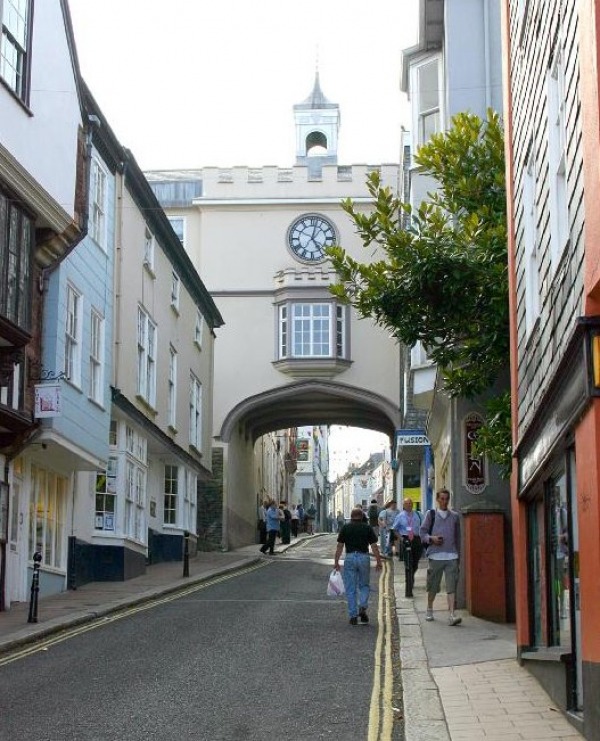 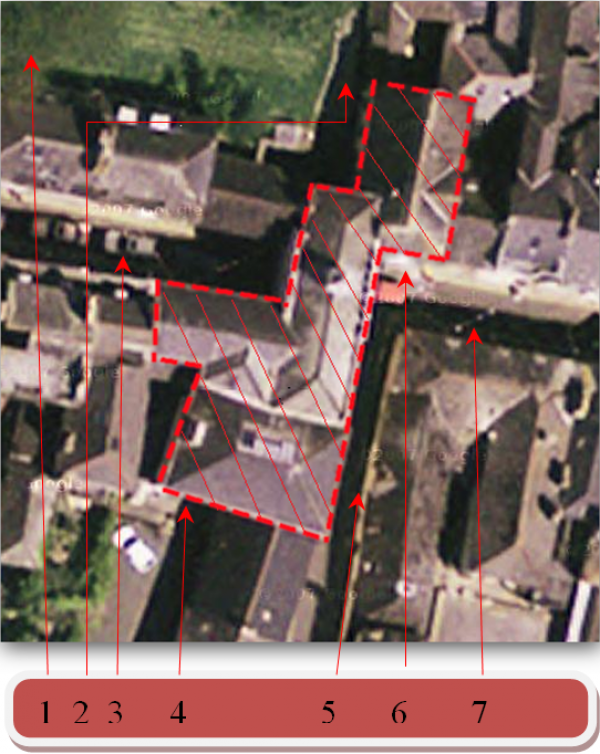 A close up of the arch and immediate surrounding area showing the extent of the fire spread.

1.   The corner of St Mary's Churchyard.

2.   Ramparts Walk, a wide pathway, accessed from steps underneath the arch and ends at the Guildhall.

4.   The part of this building where the fire started.  A jet was trained through a window here, from the small car park.

5.   The lower area of South Street, where the crew in the picture below are playing a jet through the window.

6.   The sports shop seen at the end of South Street in the same picture.

THE ARCH FIRE IN BLACK AND WHITE 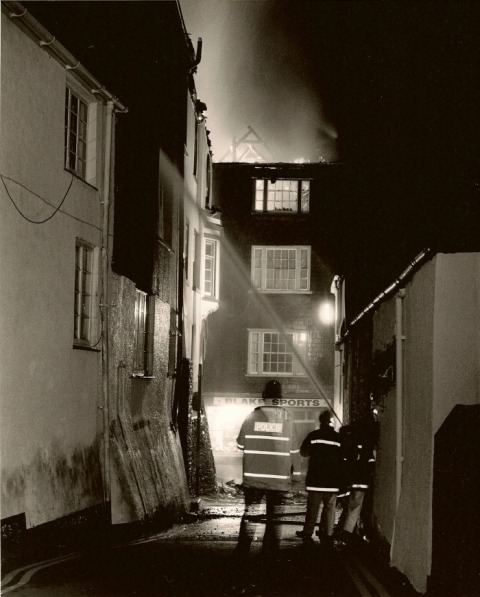 This photograph, taken from further up South Street looking towards Fore street.  The East Gate Arch is just to the left of the sports shop. This group of Totnes firefighters are playing a jet into the building where the fire originally started. 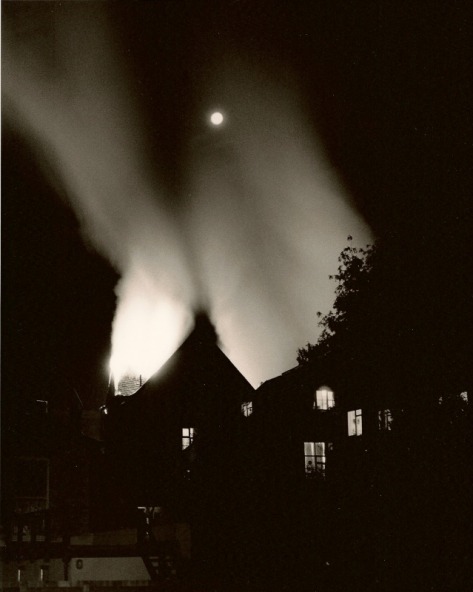 Looking over the rooftops towards the East Gate 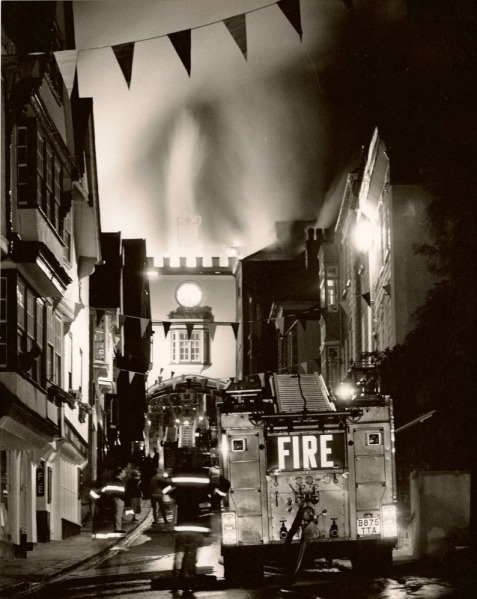 The fire, moving from left to right through the clockroom of the arch and towards Ramparts walk. 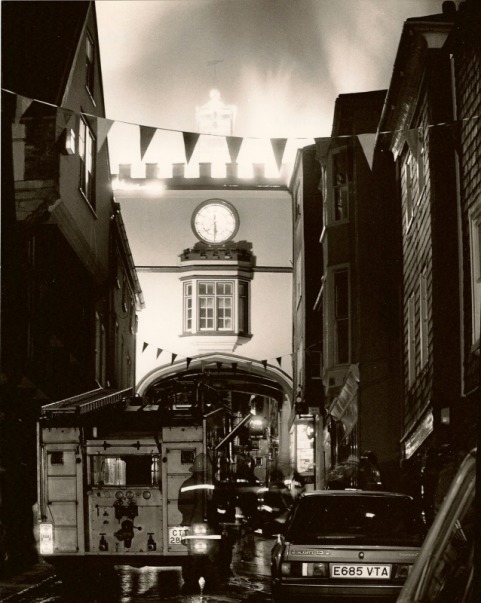 CTT 288Y with E995 VTA parked in front, stopped at the top of Fore Street, just short of the arch 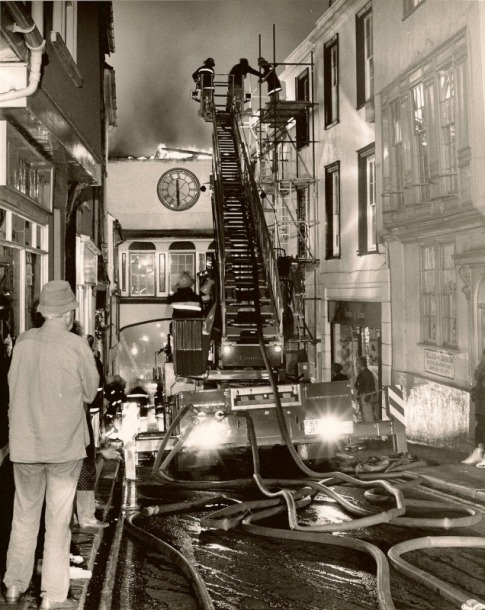 THE ARCH FIRE IN COLOUR.

Several excellent pictures were taken of the fire when it was at it's height.  I have tried to put then in order so as to show the fire travel from South Street, across the arch and into Ramparts Walk.  Take a look at the top floor window of the building in South Street where the fire started and keep an eye on the clock hands. All these excellent pictures were taken from the Fore Street side. 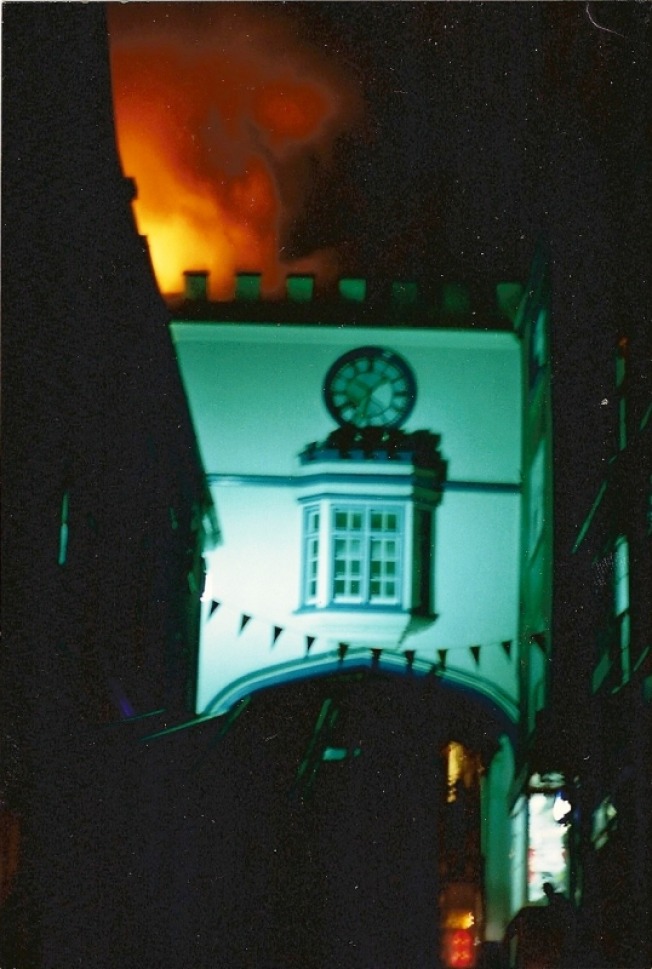 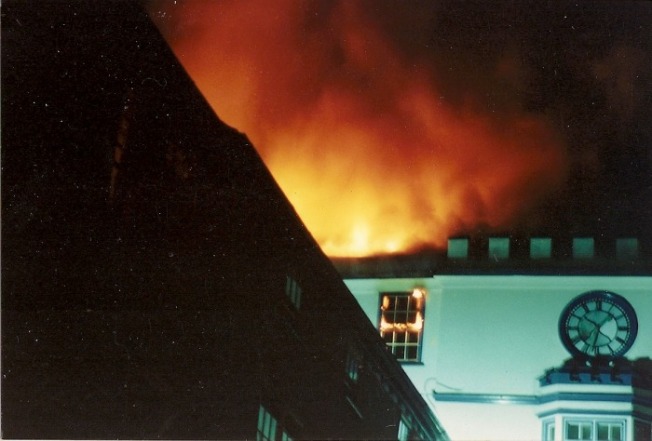 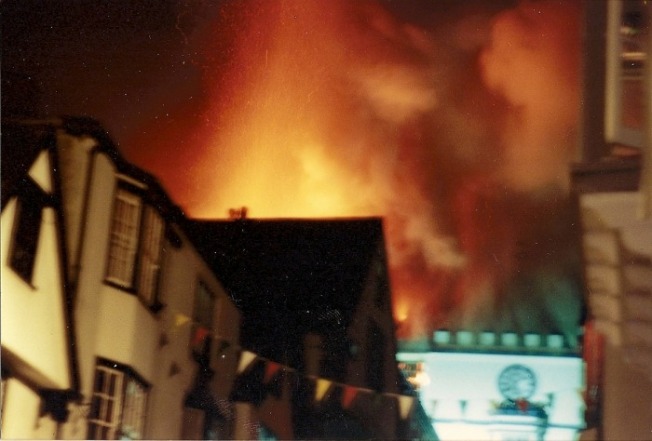 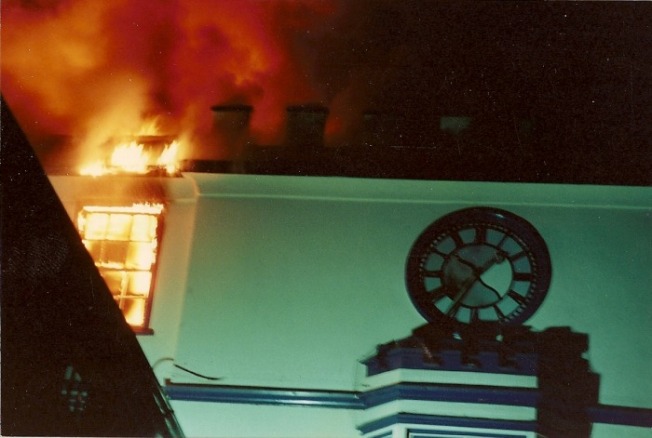 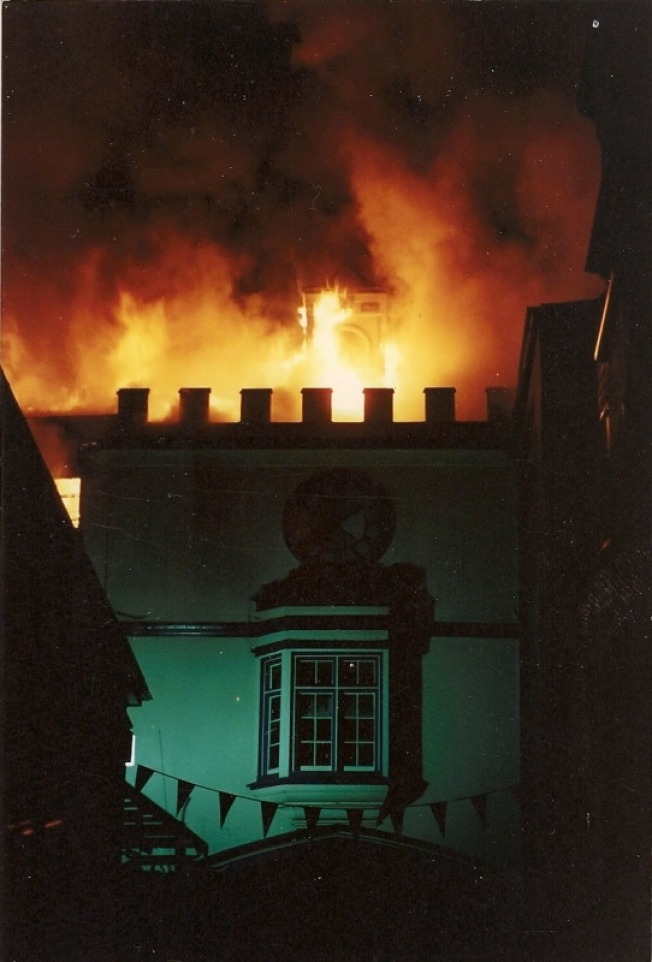 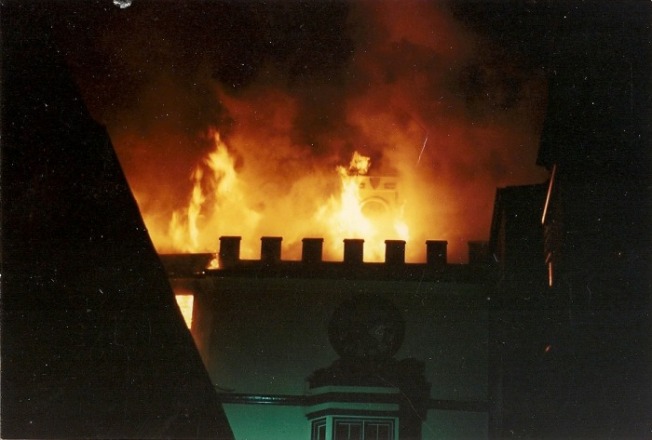 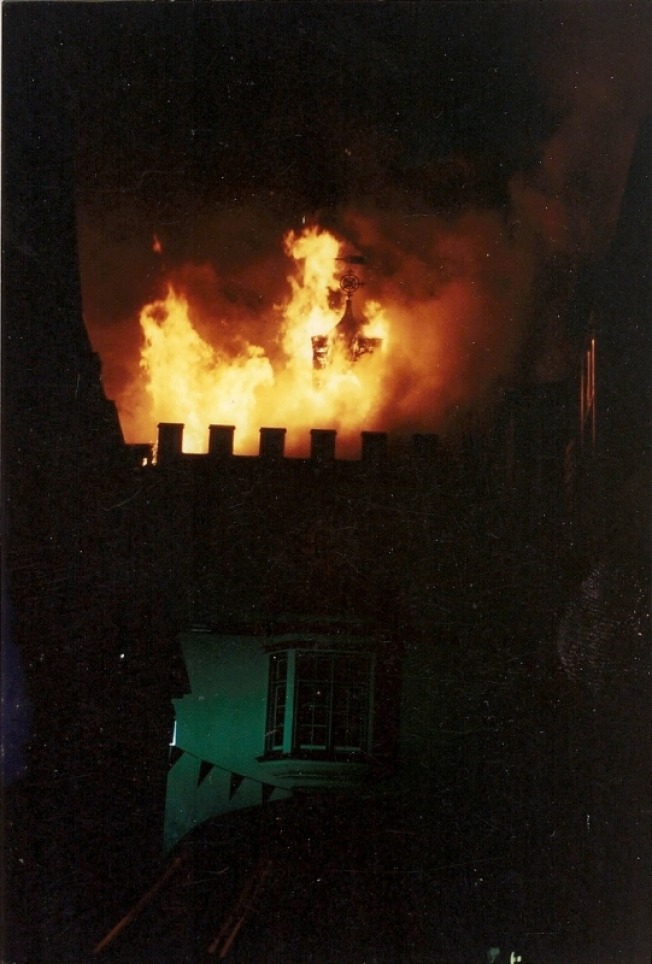 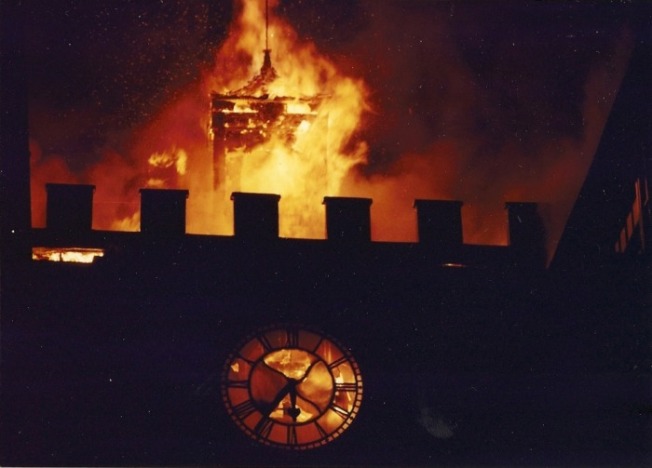 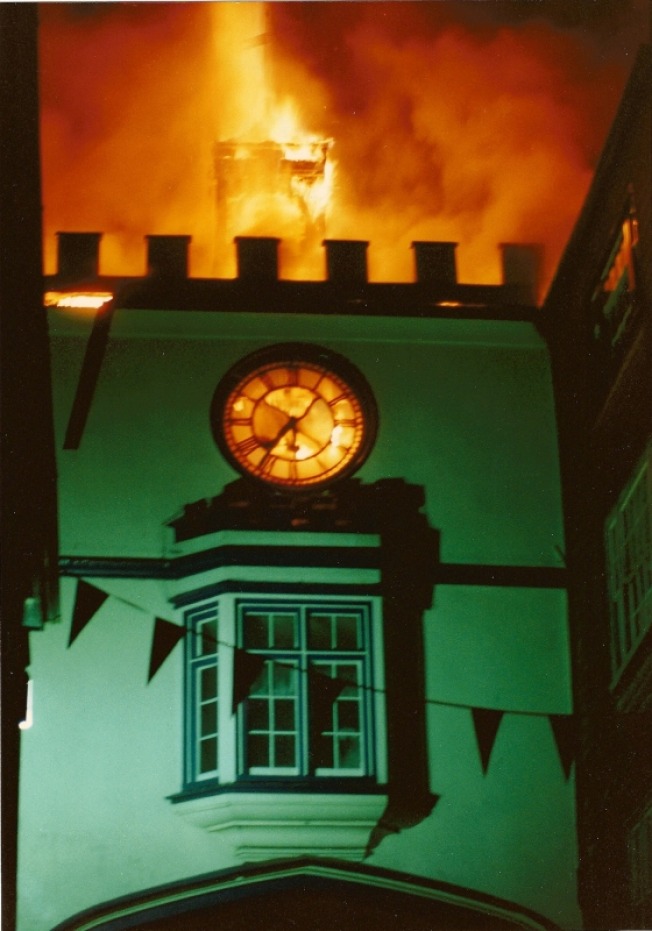 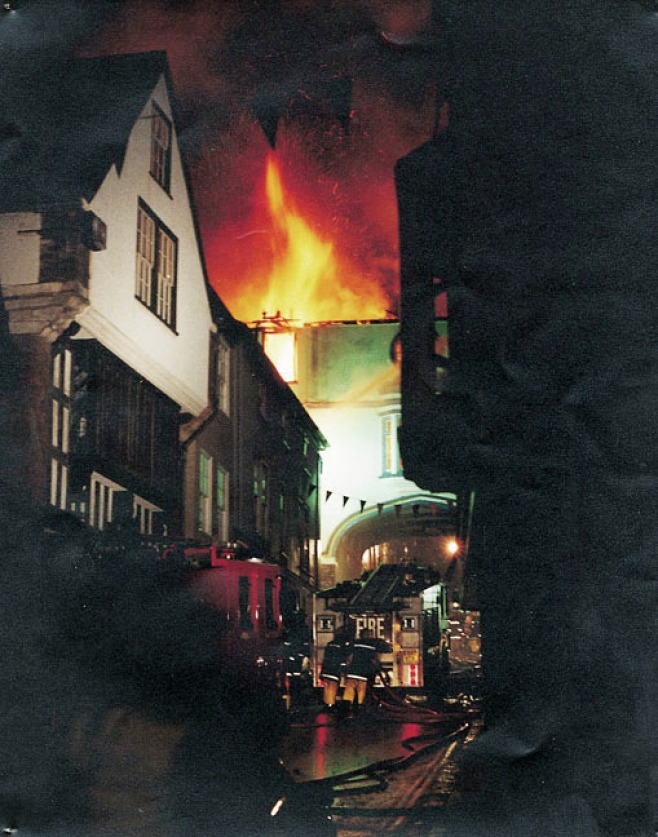 THE DAY AFTER THE NIGHT BEFORE 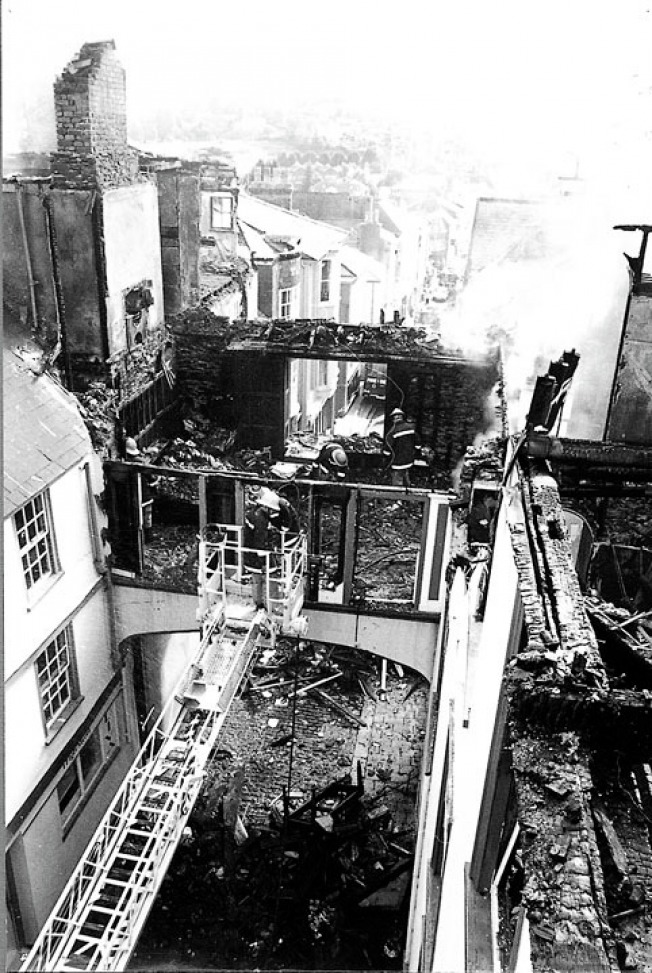 An aerial view of the devastated arch and approx 1/4 of the total fire area. This picture was taken from the scaffolding that can be seen in the picture below. The fire started in the building on the right. 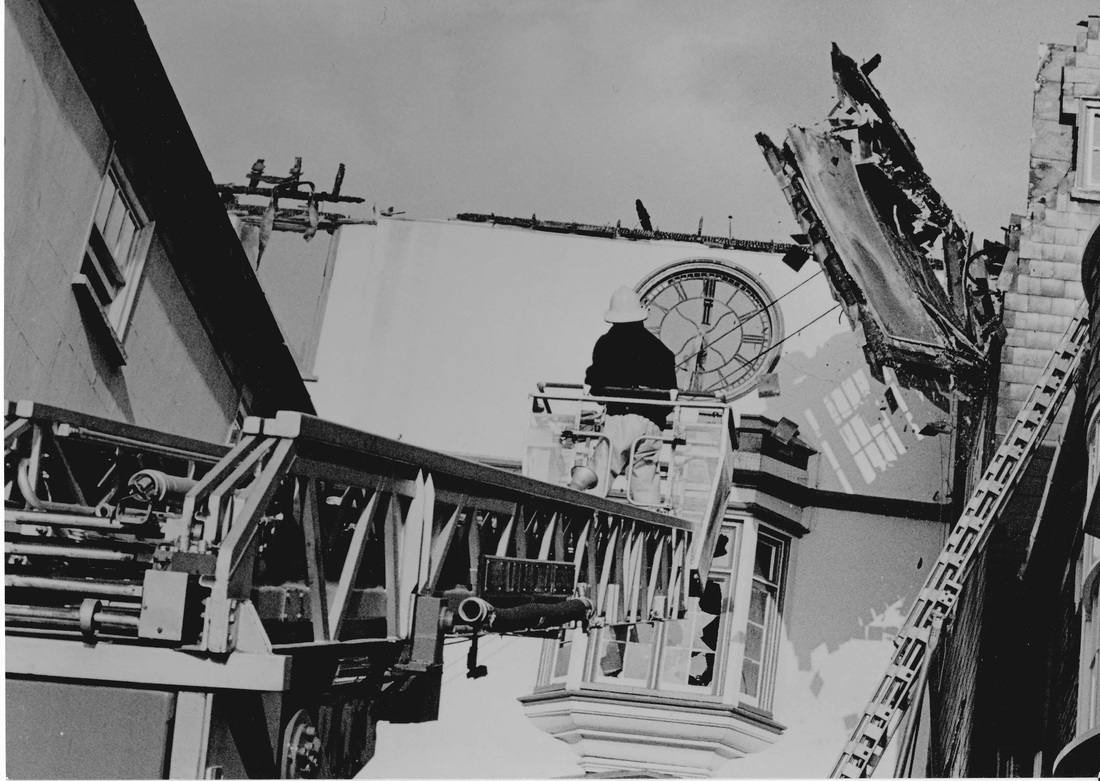 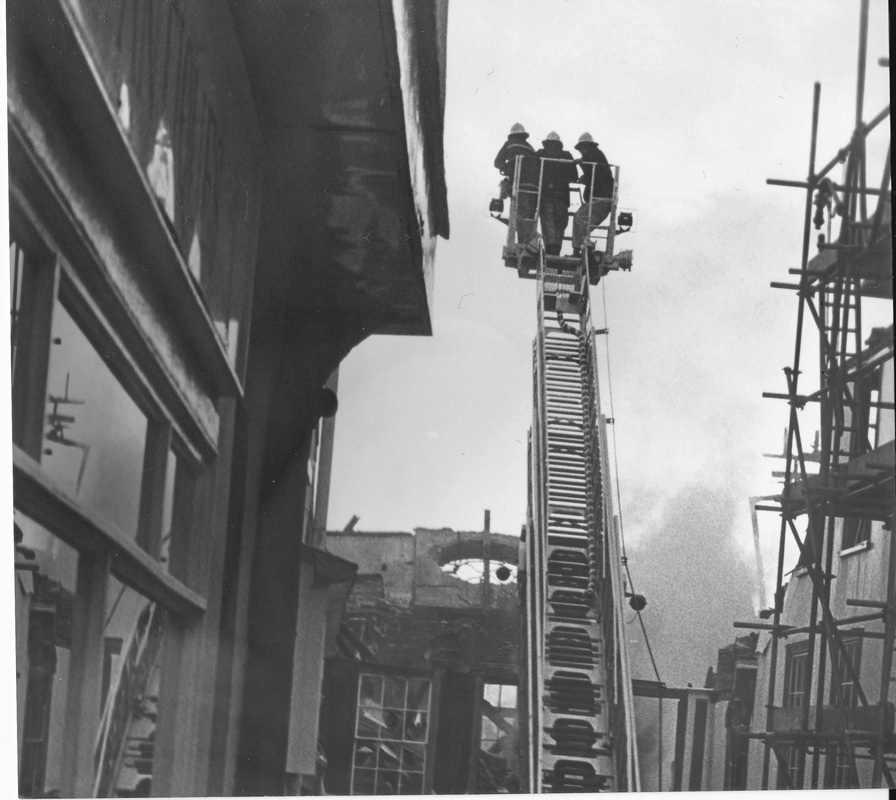 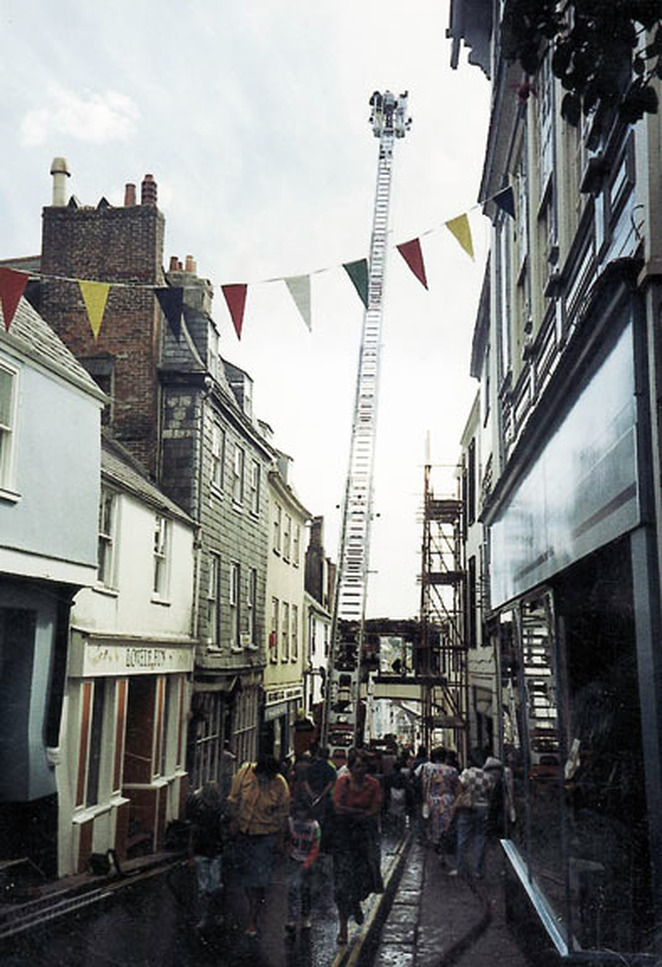 Torquay's Camiva Turntable Ladder set up at the start of High Street being used for inspection and photographs. The general public, seen here walking back up High Street  had no access to Fore Street without a lengthy walk around the town. 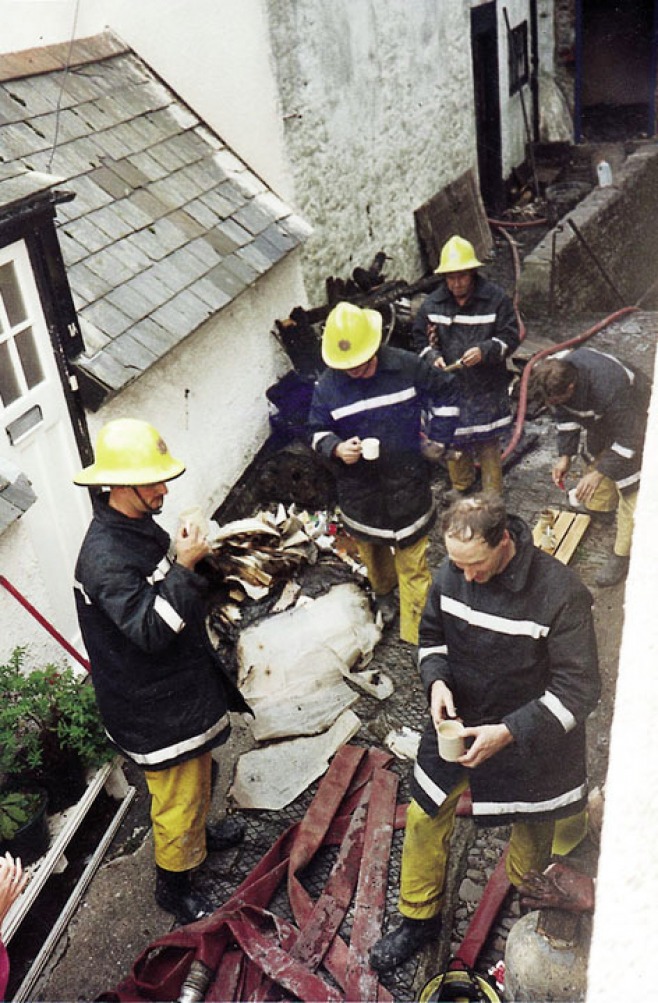 ABOVE
A fine crew, I believe from station 22 Buckfastleigh taking a breather. Buckfastleigh's appliance was the original base pump on the initial make pumps 8. They set into the old Bacon Factory leat in Coronation Road and supplied water through twinned 70mm hose to the fireground. The leat is about 150 yards from Totnes Fire Station 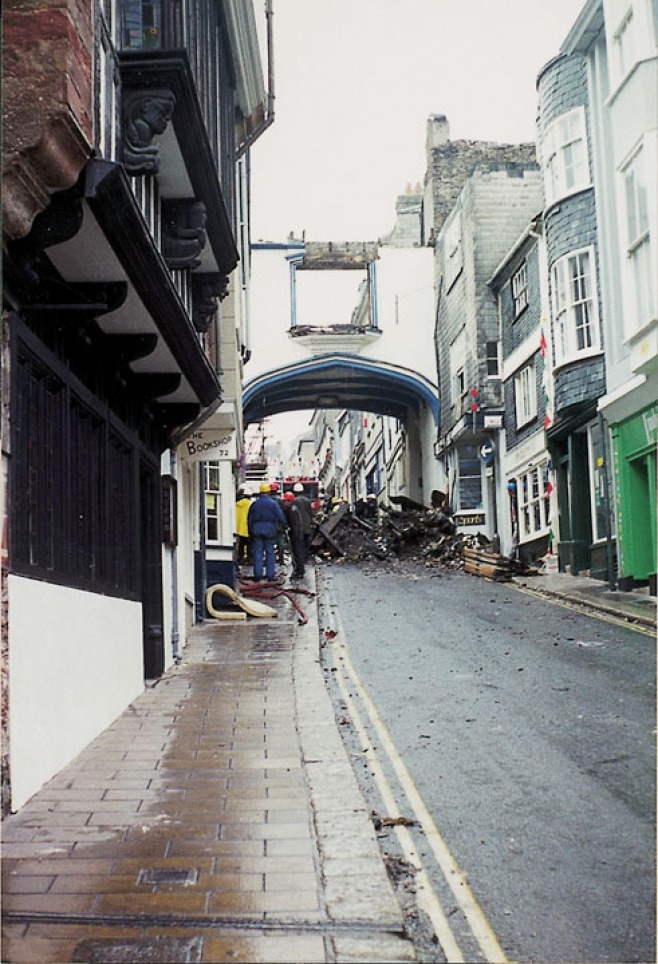 ABOVE
Workmen arrive to close the main street and clear the rubble.
Note - the large building in the left foreground is Totnes Museum and which gives a good insight to the amount of timber used in Fore Street and High Street premises 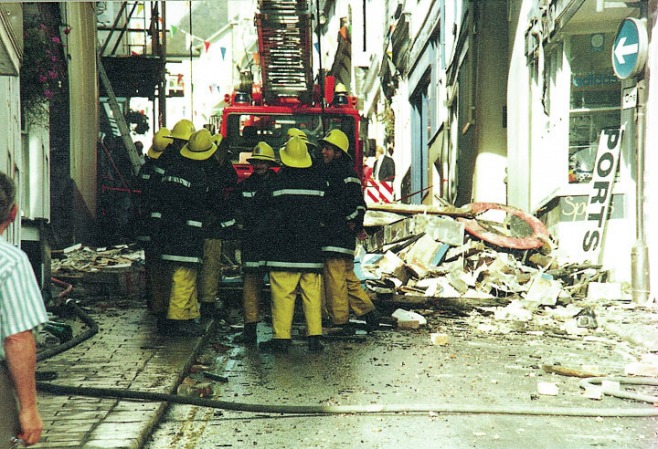 Crews taking a breather during demolition. 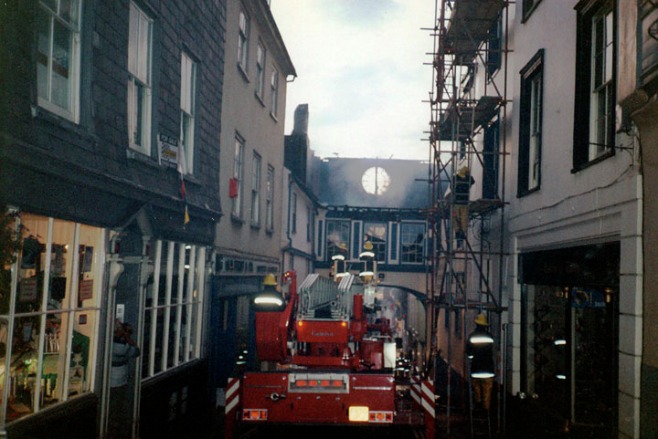 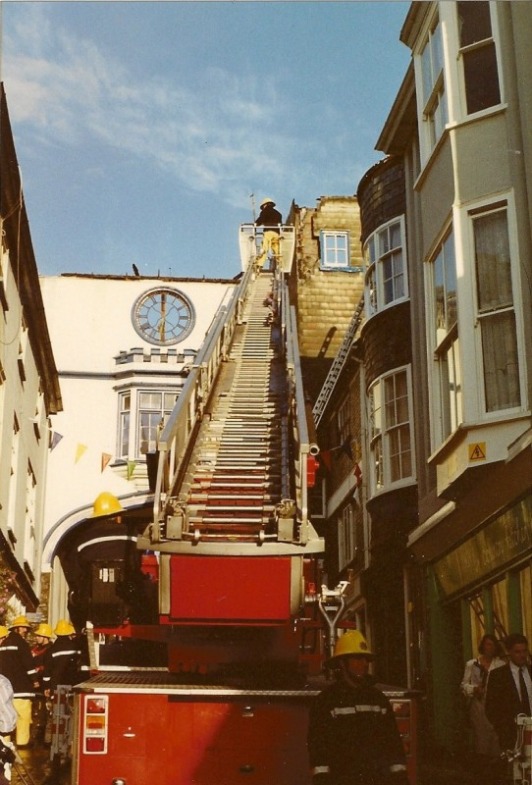 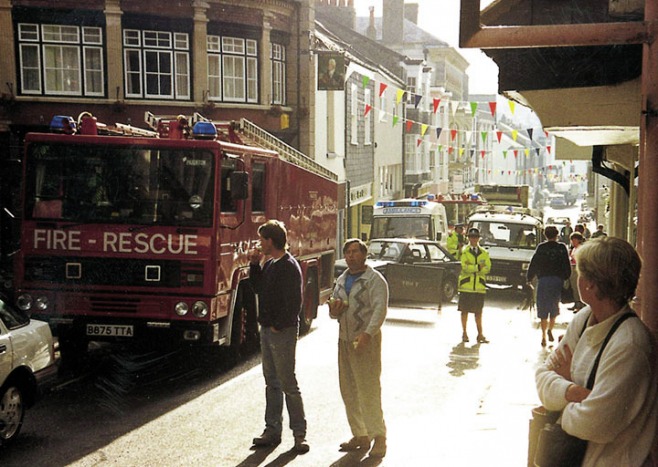 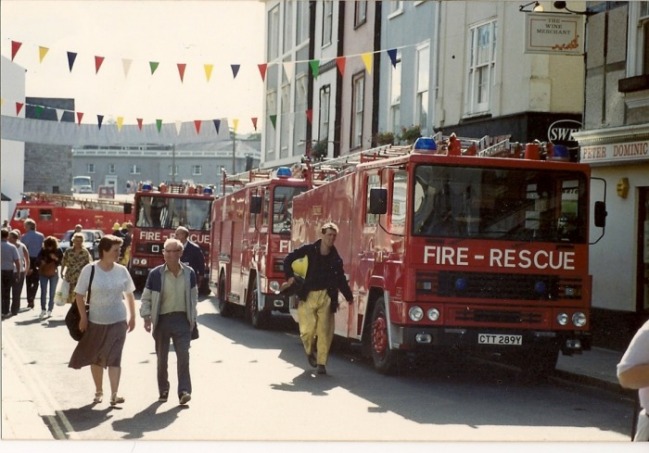 Appliances parked at the bottom of Fore Street, outside the Seven Stars Hotel and on the Plains 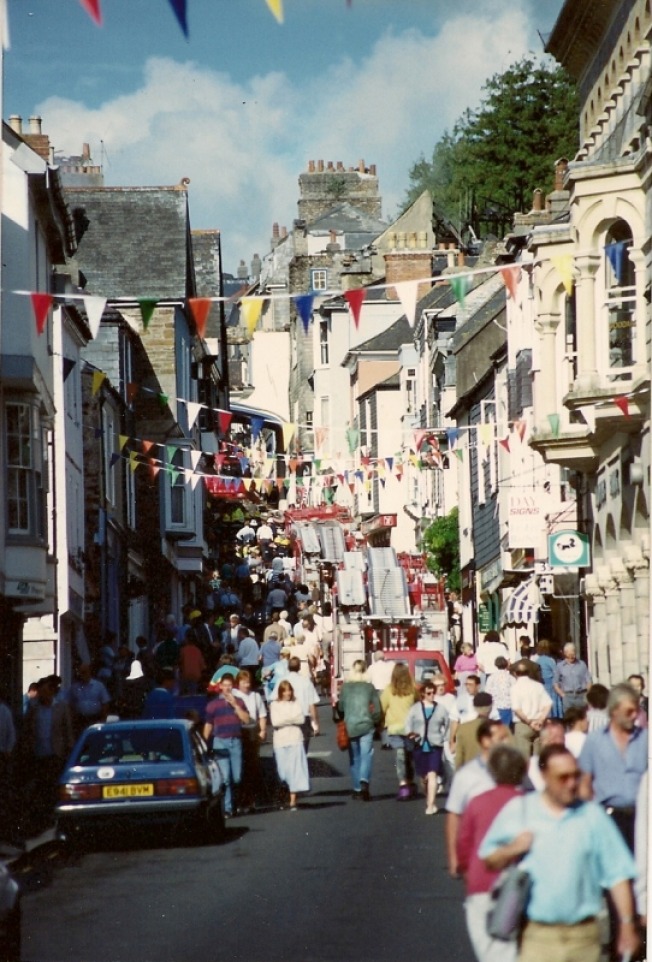 Looking up Fore street to the arch the morning after the fire. A sunny morning with large numbers of holidaymakers in the town. Several more parked appliances and Torquay's TL (174) parked on the other side of the arch at the bottom of High Street.  With the fire debris piled at the base of the arch, which you can just see in front of the group of firefighters standing at left of middle centre of the photo, the town was physically cut in half as there was no easy way from Fore St to High St or vice versa without a long detour around the town. Also note the fire damage to the roofs below the trees, (top right).

This excellent photograph gives a graphic illustration of the access problems faced by the attending crews. At the bottom of South Street there is no appliance access.

THE VIDEO TAKEN DURING AND AFTER THE FIRE

Taken during firefighting operations early on at the incident ( before the arrival of the first Turntable Ladder - 174 ), to the early morning and finally during the following day.  The film quality for the majority of the video is very good, but at times very grainy. Apologies for splitting the video into 3 segments, but due to maximum upload limits I had no choice.  I hope it doesn't spoil the video.
I have edited the video to remove unwatchable content and then added transitions and comment to try and explain some parts and hopefully point out from what part of the town the film is being taken from.

I hope this video gives you an insight into the rapid fire spread and the operational difficulties faced by the crews.

All in all a night to remember.

This video segment starts with the camera in the small car park in South Street and shows the actual area where the fire started, looking across the top of the arch towards Ramparts Walk.
This video is static at this location for approx 12 minutes as obviously the public were kept well away, but bear with it, as the original comments made on the video ( as well as hearing the hard working pumps) give a small insight into how the public reacted to this incident.
After about 4 minutes you are able to see the copola on top of the arch and the roof of the building next to the chimney become involved. Also look out for the jets of water on the right, positioned in South Street.
The camera then moves into High Street where the fire has crossed the arch and is now in Ramparts Walk.  The building to the right of the arch with the scaffolding outside is the building to the left of the chimney you saw earlier.

The camera has now moved into South Street, looking down towards the top of Fore Street.  On fire is the flats above Blakes Sports shop in Ramparts Walk.
Look out for the roof timbers collapse, and after a brief look back into High Street, the dense smoke and the debris falling from above the sports shop.
The camera moves back into High Street after the arrival of Torquays TL (Turntable Ladder - 174) and shows the mass of hoses in the street.

At dawn, and the camera is looking over the rooftops from South Street.
The firefighters are  damping down and making safe.

The camera then moves into Ramparts Walk itself.  After a few minutes, and while the cameraman says " the firefighters had great difficulty getting water up" the camera looks down the steps towards the main street.  These steps are the only way to Ramparts Walk from the main street, and you have to access them from under the arch itself. Not an easy task when the arch above you is well alight.

DON'T FORGET TO LEAVE A COMMENT IN THE GUEST BOOK - THANKS